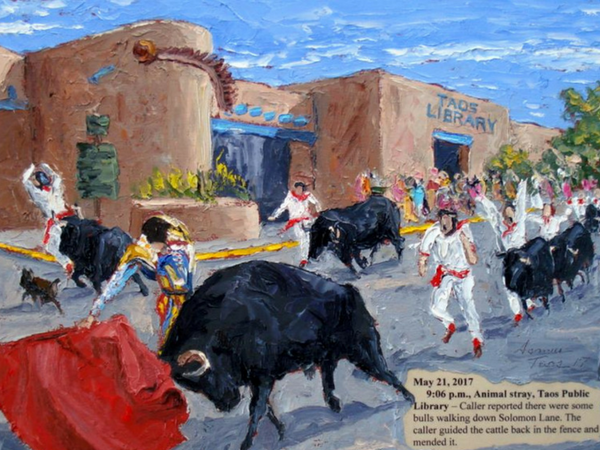 As Jane Austen’s novel, Pride And Prejudice, works so deliciously toward its satisfying conclusion, Mr. Darcy’s housekeeper says of Darcy’s sister, “. . . and so accomplished!-She plays and sings all day long.”

Also true of my Albuquerque sister, Linda.  But playing and singing is just the beginning.  Yes, she’s good on the piano and guitar. And she’s sung in choral groups that have taken on some of the most demanding works in the repertoire.

She’s also multilingual, including fluent Swahili.  During her career teaching English as a second language, heaven only knows how many languages she picked up.

A serious birder, she has somewhere near near 6,000 species, of the world’s 10,500, on her life list.  A good enough seamstress, in her younger years, to make her husband, Jim, a work suit.  (My wife’s also very good, but that’s something she never even attempted.)

And, something I particularly admire, she’s given to hospitality with their elegant adobe style home that she largely decorated.

After retirement, and nearly single handedly, she ran a school for children in Tanzania for several years. She’d gone there originally to climb 19,340 foot Mt. Kilimanjaro-which she did.  But she fell in love with the people of Tanzania.  However, this was where the force of her irresistible personality ran up against the rock of African corruption.  Despite hiring a personal guard, the rock prevailed.

She wrote a book about getting up the mountain called, Climbing Kili.   She still writes.  But, now I think, mostly indignant letters to the editor about Trump, guns, and New Mexico’s notorious drunk drivers.

Did I mention that she and Jim are inveterate world travelers?  Oh, yeah.  I did.

I could go on.  But I’ll leave it at this:  of us four siblings, Linda best fits “and so accomplished!”

But I get ahead of myself; I haven’t even gotten to Taos.  Let alone Albuquerque.

From Cimarron and lunch at the St. James, I headed west and then turned right on 38 to drive the northern half of the loop around the state’s highest peak, Mt. Wheeler.  The shortest day of the trip, it was a scenic cruise to my room at the Taos Inn, where they’ve been welcoming guests since 1936.

Not sure what came over me, but while at the Inn, I sprang for a whimsical, colorful painting by Mark Asmus of a matador leading a parade of bulls past the Taos library.  Entitled Mayhem, it was one of a series based on quirky police blotter reports.  Marleen wasn’t amused.  When will I ever learn?

The next morning, and at Linda’s suggestion, I headed northwest from Taos on US 64.  Good thing, too.  Otherwise, I might’ve missed the “High Bridge” over the thin, green ribbon of the Rio Grande, an airy 800 feet below where I iPhoned this picture. 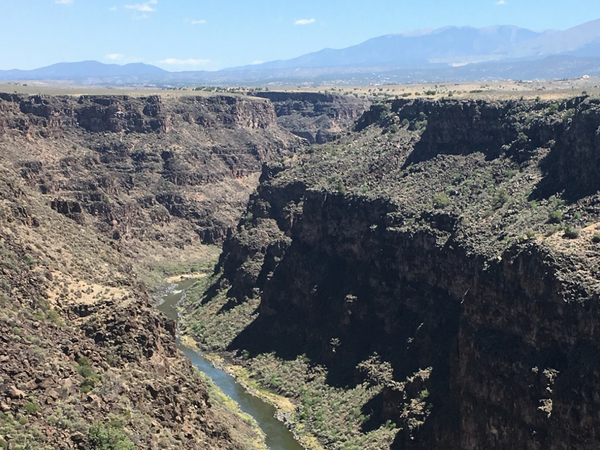 That third day was the longest of the trip.  A favorite among bikers, I saw more motorcycles on the sensuous two lane road than cars.  Punctuated by views that seemed to stretch out forever, by the time I’d loped around to Española, my right knee was feeling every inch of it.  Badly in need of a break, I pulled into a taco joint that, at best, looked greasy.  But, apparently, it’s tough to get a bad Mexican meal in New Mexico; the food was fine.

The couple in the next booth, although a bit rough rough around the edges, were very friendly.  When I started off with, “You look like you know your way around here.  How do I get to Los Alamos?”, he was ready with an answer. “No problem. Go left out of the parking lot, take another left at the first light, and then go left at the highway.  That’ll take you right up to Los Alamos.”

Model of the Gadget

Forty-five minutes later, I was standing in front of a mock up of “The Gadget,” the nuclear bomb that had been built at Los Alamos and then tested in the New Mexican desert.  And which, thankfully, brought World War II to a swift conclusion, sparing American and Japanese casualties that some have estimated could have run into the millions.

Given the highly toxic and sometimes dangerous experiments that took place at Los Alamos, Santa Fe seems a bare hop, skip and a jump down the hill from where the nuclear age dawned.

And, after a restful night at the elegant Four Kachinas B&B in Santa Fe, it was not much further to Albuquerque. Where I dropped off my six banger Camry at Hertz. And where Linda picked me up.  What’s the saying?  “It’s not the destination, it’s the journey.”  Probably not the smartest thing to have flit across one’s mind when visiting your sister. But it was going to be tough to top the journey.

However, if anyone could do it, Linda and Jim could.  They’d gotten a jump on it early that morning by taking Marleen on a day long excursion to the Bosque del Apache Wildlife Reserve for bird watching on the lower Rio Grande.

And they were just getting started.